Property Market : Malaysia has a significant property overhang problem and it is largely the outcome of oversupply in relation to demand, especially in prime areas such as KL, Selangor and Johor. This is despite what some might believe – that the overhang is only the result of a temporary situation of a slow economy.

Property overhang is commonly used as a tracker to diagnose the health of a residential property market along with other indicators such as house price index (HPI), volume/value of transactions and sales performance. Despite various measure taken by the government over the years, the problem of property overhang persists and in fact, continues to exacerbate. Long-term data paint overhang as a permanent feature of the Malaysian housing market as it continues unabated regardless of economic and market situations. The only difference is its severity.

Though residential property overhang which includes both landed and high-rise properties have shown a decline for three consecutive years – from 32,313 units in 2018 to 30,664 units in 2019 and 29,565 units in 2020; based on the latest NAPIC statistics, the situation is in fact worsening. Residential- and commercial-titled property surplus recorded an all-time high of 53,171 units in 2020 (Figure 1). Serviced apartments are the biggest contributor to the problem, accounting for 42.8% of the total overhang compared to 38.8% and 24.8% for residential high-rise and landed homes respectively.

Perceived cause of the overhang problem / Property Market

There are two prevalent but distinct beliefs with regard to property overhang. The most common perception among buyers is it is caused by the building of overpriced houses, outside the reach of the masses. This is particularly true of Johor where the launch of high-end serviced apartments appears to be the norm since 2016. Both prices and volume are several times higher than the national average following the establishment of the Iskandar Region international zone which has motivated developers to capitalise on foreign purchasers.

The same perception is also held by the government, where overhang is the outcome of active launches of overpriced houses by some property developers, especially in prime growth areas. The abundance of higher-priced properties in the market has aggravated the housing affordability conundrum in the country, leading to a decline in housing demand and along with it, a less active housing market.

A different take on the issue / Property Market

Newly launched properties priced at RM300k and below declined by 11.3% only in comparison, suggesting that mass-market housing product is becoming the mainstay of today’s property landscape. 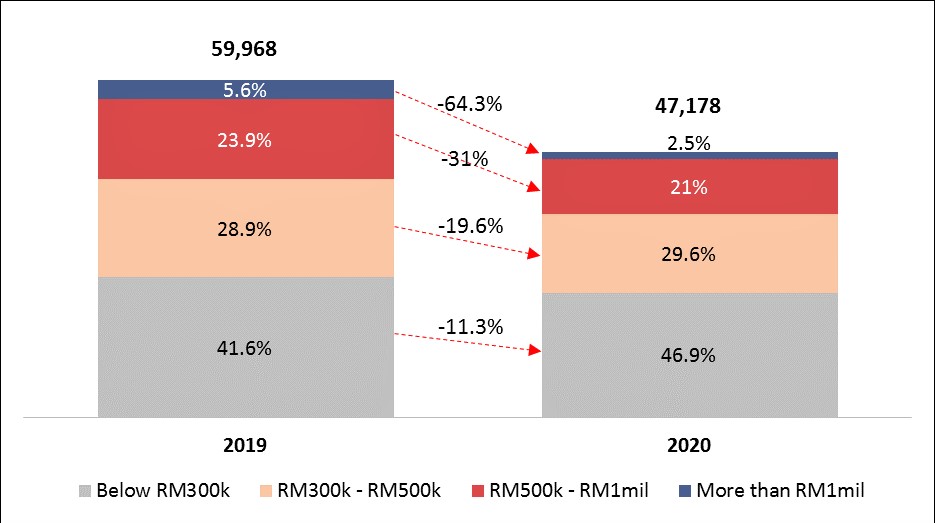 With this in mind, proponents of the market economy – property developers, in particular – hold a contrasting viewpoint: the current property overhang is more of an outcome of weak housing demand, which is a result of a slow economy, unemployment, low market sentiment, tough credit accessibility and shifting housing preferences. Once the economy picks up, both locally and worldwide, buyers’ sentiment will rebound, and unsold stocks will be absorbed by the pent-up interest in homeownership among eligible buyers and investors. 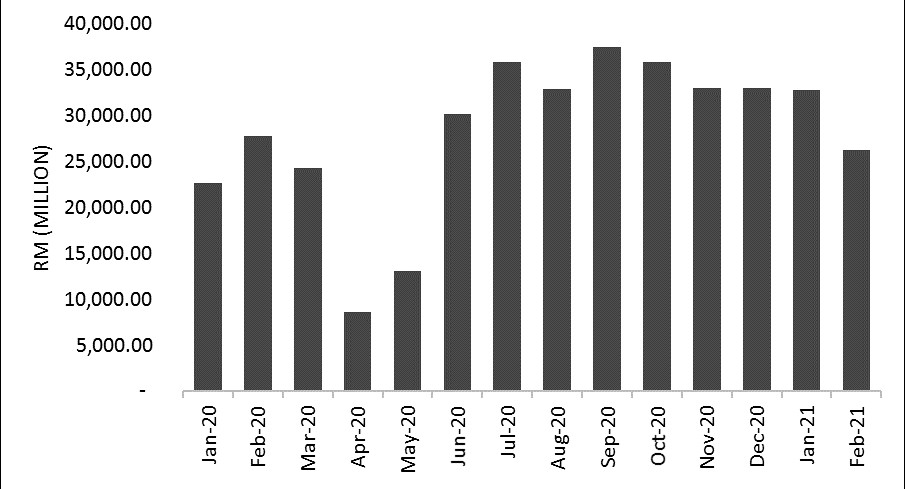 While both of these beliefs do contain a basis, they have overlooked the role of oversupply. Oversupply is rarely considered the root cause of property overhang because there is no oversupply in the country. As long as the country experiences positive population growth and with a large Generation Y and Z forming the mainstay of the country’s housing market, demand for housing will always exist. This is true if one compares the total number of households against the existing housing stocks in Malaysia. For example, in 2019, there are 7.28 million households against 5.98 million existing housing stocks (residential and serviced apartment) (Figure 4), indicating an undersupply.

Housing demand is also fuelled by the need to replace old housing stocks, upgrading or downgrading of houses following changing lifestyle, the ability of a household to own a second or third house, and migration. As such, property developers are not overly concerned about supplying more than what can be absorbed by the market; rather, their motivation to build is based on the prevailing market situation, economic indicators, market signals and government policies that promise optimistic business opportunities.

The compounding growth of housing stock

Besides, the severity of overhang varies from project to project. According to a study by the Royal Institution of Surveyors Malaysia (RISM), property developers get close to breaking even when sales of units reach 50%. A project makes a normal profit if sales go beyond 50% and even makes a windfall if sales hit above 70%. Coupled with the belief that the housing industry is cyclical in nature, whereby the market can absorb any unsold stocks over time and may even perform better when there is an upswing, this causes property developers to not be too concerned about overhang in their inventory.

However, there is danger in holding on to this premise, because once the rate of supply outpaces the rate of demand, oversupply of houses will occur in time to come. Housing stock in the country increased at a compounded annual growth rate of 3.38% in the period between 2010 – 2019, as compared to a 1.52% CAGR of new household formation (Figure 4) in the same period. This shows that in the long run, an undersupplied market will eventually come to a point of saturation, followed by oversupply.

Obvious relationship between oversupply and overhang

For many, using the number of households as a benchmark to limit housing supply is a rather rough estimation, given that each household is assumed to be capable of owning one housing unit although some households own more than one house. This is because the homeownership rate in Malaysia is 76.3% in 2019, suggesting that there are households that do not own a house. If the number of houses owned by every household is calculated, it is likely that on average, each household will be owning one house only!

In this sense, benchmarking the limit of housing supply using the number of households should be seen as a reliable methodology that provides an insight into the limit of market absorptivity with the application of a worst-case scenario. Moreover, this is also the same methodology adopted by policymakers when formulating state or local plans, where the number of households is first projected, followed by the estimation of acreage of land to be allocated for building residential housing units to house each of these households.

The relationship between oversupply and overhang is obvious if one were to cross-reference the annual stock growth – the additional completed units added into an existing inventory of stocks in a particular year compared to the year before, which is published in the NAPIC annual report – and the overhang figure published in the quarterly market status report over the same period. One will find that whenever there is an excessive supply in a particular year, the number of surplus properties is sure to increase in the following year (Figure 6).

Note that both annual stock growth and overhang figures would be much higher if commercial-titled serviced apartments were taken into consideration. Also notice that the rate of market absorptivity does not change much from 2003 to 2020. Since this is the case and supply continues to increase, then unsold stocks are definitely piling up. Only when there is a reduction of supply in consecutive years – as shown between 2010 and 2013 as well as in between 2017 and 2020 – do property overhang figures decline.

Small Homes You Can Build With Small Budget